Good news everyone! Your two favourite characters are being combined into 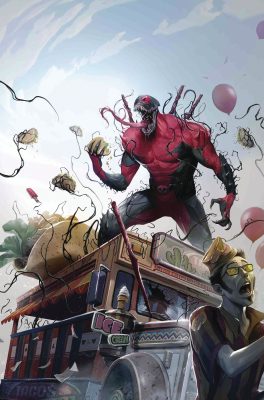 one super cool character. No I’m not talking about John McClane and Indiana Jones, though I wish I was. Instead I’m talking Venompool. Remember back in the day when they did a “What if Venom possessed Deadpool”? This is the kind of book I expected that to be. It brings us all the humour, mayhem, and gore we desire from these two characters and spares us the awful dread lock like hairdo. You have to admit that was awful, and totally killed the cool factor of a Venom/ Deadpool hybrid. Something this book is definitely not guilty of. The Venompool in this comic is super bad @$$!

In the final issue of The Edge of the Venomverse, we get to see a reality where a snarling symbiote teams up with a mouthy mercenary giving us none other than . . . Venompool. Watch with horrified fascination as this character combo wages war against a hive mind of host controlling parasites. Things will squish and spew, and there will be blood. Which one character (page 20 panel 1) learns the hard way, in what is hands down my favorite scene. Ok I lied, the Patch Adams stuff is my favourite. Oh yeah, I should probably mention that Venompool ends up in a hospital. Which is obviously the perfect place for our “hero” to fight crime and spread cheer. 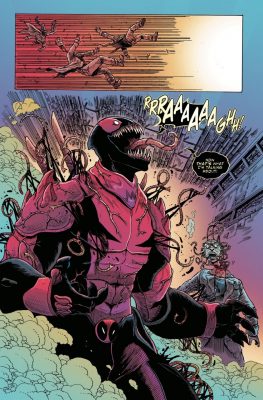 Edge of Venomverse #5 is written by Clay Mcleod Chapman (Edge of Spiderverse #4- the best of that series) and illustrated by James Stokoe (Aliens: Dead Orbit). The writing in this book is exactly what you want from a Deadpool/Venom book, it’s funny and sets the character up for lots of limb removing action. The humor in this books makes me think of the older Joe Kelly Deadpool stuff. It’s great zany fun, and reminds me why I love this character.

Of course, gross splattery violence is no good without a talented artist portraying it. Enter James Stokoe. His art always blows me away. He has a great knack for drawing disgusting things, which he once again proves with the parasitic villains of our story. His creatures are all kinds of yucky, and drawn to a grotesque perfection. The scenes in which our Venompool rips through these nasty critters are very fun to look at. Each panel is incredibly detailed with gory goop and slimy guts, it’s impossible not to enjoy. 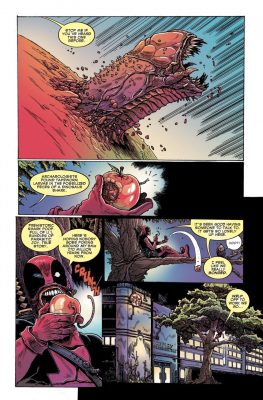 Venomverse is almost here! After this issue is one more prelude book Venomverse: War Stories #1 then Venomverse #1! The event Venom fans everywhere have been waiting for! Or at least I think they’ve been waiting for, I’m not psychic. I know I’m excited for it though. Captain Venom looks really cool, and that’s pretty much enough for me. If you’ve been collecting these books so far, don’t forget to grab this one. In my opinion it’s the best. Also, don’t forget to add Venomverse to your pull list. I doubt you’ll want to miss a single issue.