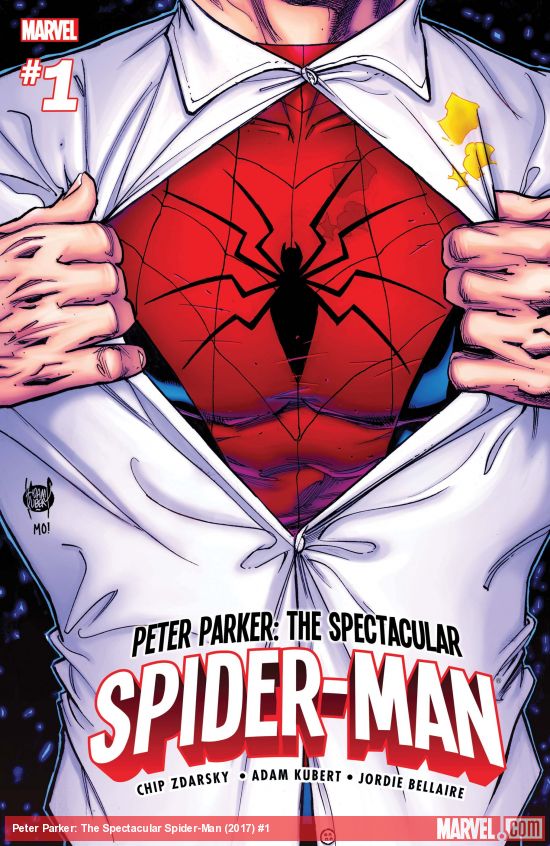 Spoiler territory for Peter Parker: The Spectacular Spider-man #1 at the end of the page.

Marvel blurb: SPIDER-MAN RETURNS TO THE FRIENDLY NEIGHBORHOOD! The webslinging, wallcrawling wonder returns to New York City in the all-new PETER PARKER: THE SPECTACULAR SPIDER-MAN. A companion series to the best-selling Amazing Spider-Man series, Peter Parker is going back-to-basics for big heroics in the Big Apple. Featuring adversaries old and new, be there as Spider-Man returns to his friendly neighborhood for his never ending battle against crime and the dreaded “Parker Luck.”

As a long time (loooong time – vol 1 long time) reader of Amazing Spider-man (ASM) – I have a certain affinity to this web crawler.  And spin-off books haven’t always worked out well for him (or necessarily made sense – ahem Marvel).  However: a book written by the king of sarcasm Chip Zdarsky and an artist that keeps with the solid ink style that has been a staple of ASM since way back in the day (it was a Wednesday) like Adam Kubert.  And finally we aren’t dealing with an AU (alternate universe) or separate dimension or whatnot.  This book is a companion to the ASM books we’ve all come to love.  It constantly references the events of the main book and respects the canon as such.

As far as story goes – the story opens with the introduction of the bromance between Spidey and Johnny Storm (it seems that Spidey gets out with EVERYONE).  With appearances by Black Widow, Ant-Man and the Tinkerer’s good brother – the story moves along at quite a good pace and provides the reader with quite a bit of “back story” that supports the other book quite well.  Zdarsky imbues this book with a TON of humor that works really well with the character and should serve the book for quite a while.

And the big twist?  Spidey has a sister… let that sink in.  If you aren’t running out to get this book now – I question the future of the human race.  DRAMA!