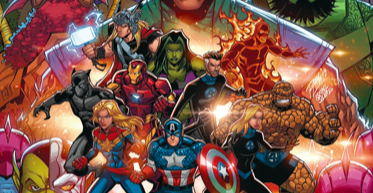 Already planning for the spring? So are we! Here’s a list of the books that appear to be the highlight of April’s releases. There’s a new event, some 80th-anniversary character books, a local creator book in addition to a boatload of interesting books!

BLACK WIDOW (Marvel – Ongoing) – April 1
Natasha Romanoff has been a spy almost as long as she’s been alive. And she’s never stopped running, whether she was working for the good guys…or the bad. But Natasha’s world is about to be upended. Beyond San Francisco’s Golden Gate lies a mystery that only the Marvel Universe’s greatest spy can solve.
(W) Kelly Thompson (A) Elena Casagrande (CA) Adam Hughes

BOYS DEAR BECKY (Dynamite – Ongoing) – April 1
Twelve years after the events of The Boys, Hughie finds himself back home in Scotland where he intends to finally marry Annie in the company of friends and family. But the sudden appearance of a peculiar document sends our hero into a tailspin and threatens to bring the events of his nightmarish past crashing down on him in the worst possible way. There was one story about The Boys that Hughie never knew. Now, whether he likes it or not, he’s going to.
(W) Garth Ennis (A) Russell Braun (CA) Darick Robertson

ROGUE PLANET (Oni Press – Ongoing) – April 1
Salvage vessel Cortes tracks the Lonely Orphan, a planet with no star system to call its own. Somewhere on this hostile rock is a payload fit for a king. To attain it, though, the crew of the Cortes must brave razor rock, poisonous vapors, treacherous footing, and… the most mind-numbing horrors imaginable. Something nightmarish is at work on Lonely Orphan. Something cruel. Something hungry.
(W) Cullen Bunn (A/CA) Andy MacDonald

PUNISHER VS BARRACUDA (Marvel – 5 Book Mini-Series) – April 8
While Frank Castle closes the case on a mob hitman hiding out in the Deep South, a brutal jailbreak in Miami catches his eye. But one of the escaped prisoners is the man known only as Barracuda, the most sadistic and dangerous of killers in a gangland filled with extremely dangerous and sadistic killers. Lock the doors and prep the morgues; war is coming to Miami!
(W) Ed Brisson (A) Declan Shalvey (CA) Ryan Stegman

DC 80TH ANNIVERSARY SPECTACULARS (DC – One-Shots)
CATWOMAN 80TH ANNIV 100 PAGE SUPER SPECT – April 15th
Our gal Catwoman is turning 80 next year (and looking very good, if we meow say), and DC is celebrating with nothing less than with a huge soiree, invite-only, packed with creators who mean the most to her and to whom she means the most!
JOKER 80TH ANNIV 100 PAGE SUPER SPECT – April 29th
The Clown Prince of Crime celebrates 80 years of chaos! The Joker has been the greatest villain in comics since his debut and to celebrate we have a who’s who of comics’ finest talent giving the Harlequin of Hate the birthday roast he deserves.

NEW WARRIORS (Marvel – 5 Book Mini-series) – April 15
With Kamala’s Law in full effect – forbidding unsupervised super-heroics by anyone under the age of 21 – it’s time for the New Warriors to step up. Thrasher reunites with Firestar, Rage, Speedball, Namorita, and Silhouette to mentor a whole new generation of heroes…whether they like it or not.
(W) Daniel Kibblesmith (A) Luciano Vecchio (CA) R. B. Silva

X-FACTOR (Marvel) – April 22
By the grace of The Five, the resurrection protocols can bring back any fallen mutant. But such a huge enterprise isn’t without its problems and complications… When a mutant dies, X-Factor is there to investigate how and why to keep the rules of reincarnation.
(W) Leah Williams (A) David Baldeon (CA) Ivan Shavrin

IMMORTAL HULK THRESHING PLACE (Marvel) – April 29
There’s a monster raging in America’s heartland – and it’s not the Hulk. When a young girl goes missing on a Kansas farm, Bruce Banner gets the itch – the one that tells him gamma is on the loose. But this town doesn’t take kindly to strangers – especially the big, green, violent kind. Can the Hulk save a child before it’s too late, or is he about to take the blame for another massacre?
(W) Jeff Lemire (A/CA) Michael Del Mundo

Empyre (Marvel – 6 Book Mini-Series with Tie-ins) – Apr 15
The Kree and the Skrulls have united under a new emperor – and their war fleet is on a collision course for our world. On the moon, the Avengers are ready to strike with the full power of Earth’s Mightiest Heroes. Approaching from outer space, the Fantastic Four are seeking a diplomatic solution. If the two teams can’t work together to save the day, things can only get worse…
(W) Al Ewing, Dan Slott (A) Valerio Schiti (CA) Jim Cheung
Other related tie-ins available in April: Empyre Avengers (4 books), Empyre Spider-man (3 books), Empyre Fantastic Four (1 book), Lords of Empyre Emperor Hulking (1 book)

RICK AND MORTY GO TO HELL (Oni Press – Ongoing) – April 29
Well, it finally happened. Rick and Morty are in Hell, and we don’t mean the DMV. It’s fire, brimstone, and torture for all eternity. Typical Rick, he sees a way out of this mess and drags Morty with him on a horrific adventure to speak to…the manager. Written by Calgarian Ryan Ferrier.
(W) Ryan Ferrier (A/CA) Constanza Oroza