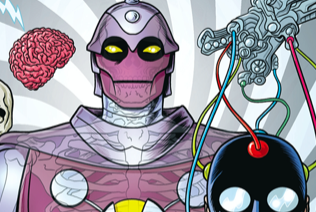 We’re back again with another month of comics! I know most of you are just starting to settle in for your holidays and everyone at AlphaComics wishes you and yours a very Merry Christmas and New Year. Keep an eye out on Facebook and Alphacomics.ca for our holiday hours and boxing day sales! Anyways – on to my pics for the best potential books of March 2020 – it’s a light month for new DC books – but there’s a ton of Marvel…

MARVEL (Marvel – 6 Book Mini-Series)
Thirty years ago, Alex Ross had a vision of a new series showing the Marvel heroes in a way they’d never been seen before. The first realization of that idea became the blockbuster MARVELS – but today Alex finally brings about his original vision: An anthology of stories by unique, exceptional talents, many of whom are doing Marvel characters for the very first time. Over this showcase series, you’ll see work by such artists as Adam Hughes, Bill Sienkiewicz, Dan Brereton and more, linked together by an overarching story by Alex and Steve Darnall.

STRANGE ACADEMY (Marvel – Ongoing)
The Marvel Universe has mysteriously changed in such an alarming way that Doctor Strange has done what he’s avoided for decades; he’s opened a school for young sorcerers. Young people from around the world with aptitude in magic have been brought together in New Orleans to study the Mystic Arts under Strange, Brother Voodoo, the Ancient One, the Scarlet Witch, Magik, Hellstrom, and ALL your favorite Marvel magicians.

DECORUM (Image Comics – Ongoing)
There are many assassins in the known universe. This is the story of the most well-mannered one. “Manners are a sensitive awareness of the feelings of others. If you have that awareness, you have good manners, no matter what knife you use.” From Jonathan Hickman.

JIM HENSON STORYTELLER GHOSTS (Boom! Studios – 4 Part Mini-Series)
Within Scandanavian folklore, there exists a vengeful ghost known as a Myling. A man traveling at night comes across a haunting cry from within the forest. He enters it to find a spirit [that] demands to be carried to its proper burial site. The man agrees, but as he travels forth, the spirit’s grip tightens… it grows in size…and the man’s gait slows. Can he unburden himself of this terrifying weight before it brings him down for good?

CABLE (Marvel – Ongoing)
Cable was a grizzled old veteran of the wars to save the future… and he will be again. But for now, he’s a young mutant living in paradise leading a life of adventure! Nathan Summers, son of two of the most powerful mutants on Krakoa, has a destiny leading the youth of mutant-kind in rebellion… so why not start now?

SPIDER-WOMAN (Marvel – Ongoing)
Jessica Drew hasn’t been feeling like herself lately (she’s not a Skrull, we promise). When the angry, irritable, and unwell Spider-Woman takes a simple security gig to help get back on her feet, she finds herself besieged by unknown forces out to destroy everything around her. What’s wrong with Jessica? Just how DID she get this job? And who are these violent lunatics who keep trying to blow her up?

TRANSFORMERS VS TERMINATOR (IDW Publishing – Ongoing)
It’s Skynet vs. Cybertron in a crossover for the ages! 1984: When a deadly race of machines emerges from another time, will a robotic guardian be able to protect the Earth from a dire future… or will the T-800 fail in his mission to prevent the world from becoming a plaything to the Decepticons?

X-RAY ROBOT (Dark Horse Comics – 4-Part Mini-Series)
Max is a family man seeking a more interesting life. While conducting a new experiment at work, the fabric of his reality is torn before his eyes, and a robotic figure appears, claiming to be his 277-year-old self. The robot is able to “X-Ray” multiple dimensions and battles a nihilistic entity from another dimension who wants to take all life to its “Pre-Big Bang” status.  Max and the robot embark on an interdimensional road trip through past and future to take down the “Nihilist” and save the universe!