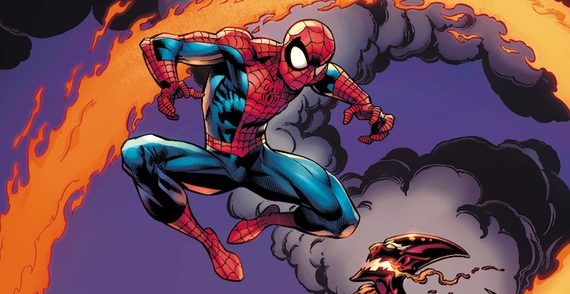 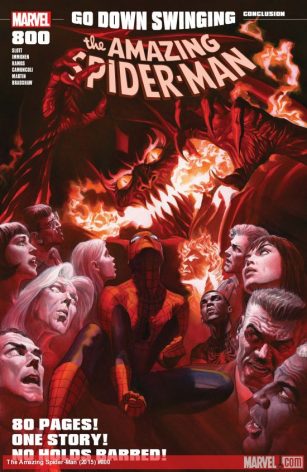 From Marvel: “THE MONUMENTAL ANNIVERSARY ISSUE IS HERE TO CONCLUDE “GO DOWN SWINGING!” Dan Slott and Stuart Immomen are joined by many of the artists who made the last 10 years of Spider-Man so Amazing! The biggest Peter Parker/Norman Osborn story of all time unfolds over one oversized story, a scope unmatched in comics! Who lives?! Who dies?! And what scars will Spider-Man bear from here on out?!”

Usually when we get these tentpole books, it’s an amalgamation of several stories.  It might even include a little filler like sketches or a lot of reader letters.  However, this book has NO filler.  Other than 1 page of letters and two pages of variant covers – the rest is the story.  Effectively you are getting a little under 100 pages of Amazing Spider-man.  Some trade paperbacks don’t have that much content.

As far as the story goes: I was blown [pun intended] away! This story about Red Goblin/Norman Osbourne has been ramping over the last five or so issues.  Green Goblin has joined forces with Carnage and Spider-man and all his friends are having on heck of a time trying and failing to beat him.  They’ve even tried using Eddie Brock/Anti-Venom which mildly wounded Goblin but that’s about it.

The problem with reviewing this book: I can’t tell you much about the story without spoiling the living heck out of it.    I can, however, nail off a few really cool references.  Using artists from over the years was entirely appropriate.  You get all the regulars in this book like MJ, Aunt May, and J. Jonah Jameson.  You get the team Spider-man has been working with (Silk and Torch, for example).  But what you get from the previous artists are references to what Goblin did to Gwen on the bridge, J. Jonah’s use of spider-slayers, and guest appearances by Venom and Doc Ock.  And the best part is – that would be a good book by itself.  The stuff I haven’t told you completely took it over the top.

The art in this book is cohesive and you don’t even notice the transition between the different artists.  As a result, the story by Dan Slott is a unifying thread over a tapestry of awesome.  It’s not his last book (that is the next book, 801) but it already feels like his swan song.  And all ASM fans will miss him.  Regardless of the circumstances, this is a GREAT book.  With several variant covers available from the Dodson, Ramos, Bagley, Romita Sr, Brashaw and many others – this is certainly the one book that fans of Venom or Spider-man should not miss.